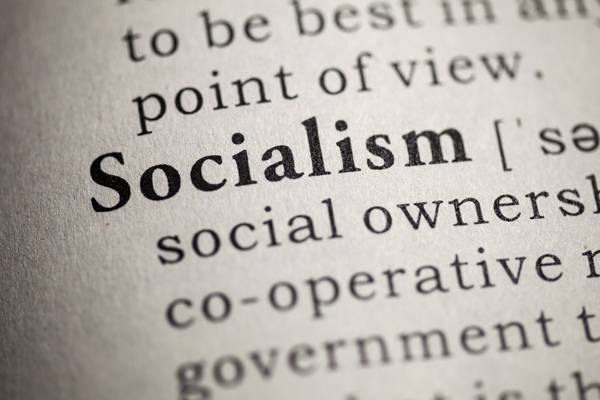 In 2019, 43 percent of Americans consider socialism to be a “good thing” and millennials are some of its strongest supporters.

Magazines such as Teen Vogue even run articles like “Everything You Should Know About Karl Marx” and “What ‘Capitalism’ Is and How It Affects People,” which says that millennials “expect a grand societal shift toward socialism” to counteract a “dystopian Mad Max nightmare” in which “rich plutocrats own everything.” Another poll found that half of young people say they would prefer life in a socialist country to a capitalist one.

But this flirtation with socialism is nothing new; in order to understand it, in fact, we need to go back to the Great Depression.

When you see how socialism thrived in that decade, you’ll understand why it’s making such a comeback today.

By the mid-1930s, following the stock market crash in 1929, the average family’s income had fallen 40 percent. But may- be they were the lucky ones compared to the 25 percent of Americans who were unemployed. For many people, volatile markets and greedy bankers were the villains responsible for taking people’s jobs and even their homes. In John Steinbeck’s 1939 novel The Grapes of Wrath, banks are described as “monsters” that men make but can’t control, and capitalists are depicted as heartless pursuers of profit. For example, in one scene Steinbeck describes farmers dousing oranges in kerosene as starving people look on, because this was necessary to keep the price of oranges from getting too low.

Steinbeck doesn’t tell his readers that it was the federal government that ordered the farmers to do this. However, he does describe the resentment many average people felt toward an economy that seemed to benefit the rich at the expense of the poor: “Men who have created new fruits in the world cannot create a system whereby their fruits may be eaten . . . in the eyes of the hungry there is a growing wrath. In the souls of the people the grapes of wrath are filling and growing heavy, growing heavy for the vintage.”

Before 1929, the Communist Party USA was a marginal movement, but during the thirties its explosive growth in membership led later historians to call that decade “the hey-day of American Communism.” However, most critics of capitalism adopted a more moderate socialism focused on redistributing wealth instead of launching a worker’s revolution.

For example, Democratic senator Huey Long blamed the country’s economic crisis on the small number of people who he said owned most of the nation’s wealth. In his notorious “Share Our Wealth Speech,” Long declared:

[T]he rich people of this country—and by rich people I mean the super-rich—will not allow us to solve the problems, or rather the one little problem that is afflicting this country, because in order to cure all of our woes it is necessary to scale down the big fortunes, that we may scatter the wealth to be shared by all of the people.

THE RETURN OF SOCIALISM

Long proposed that no one be allowed to possess more than $50 million. He claimed that confiscatory taxation on wealth above that amount could provide every family with enough money to own a home, automobile, and radio, meaning that “there will be no such thing as a family living in poverty and distress.”

Despite such lofty promises, socialism didn’t catch on in America, partly because it was associated with distinctly anti-American values. While reflecting on his unsuccessful 1936 bid for the California governorship, socialist Upton Sinclair said, “The American people will take socialism, but they won’t take the label. . . . Running on the Socialist ticket I got 60,000 votes, and running on the slogan to ‘End Poverty in California’ I got 879,000.”

In the 2010s, struggling American families were still reeling from the Great Recession, after which the average family’s income fell by 4 percent and nine million jobs were lost—doubling the unemployment rate to a high of 9.3 percent. What angered people the most, however, were policies that seemed to allow the wealthy to hoard the country’s wealth at the expense of the poor. In 2011, protesters took over lower Manhattan as part of the “Occupy Wall Street” movement, carrying signs saying, “We are the 99 percent.”

That slogan came from economist Joseph Stiglitz’s article “Of the 1 percent, by the 1 percent, for the 1 percent,” in which Stiglitz claimed that 1 percent of the population controlled 40 percent of the nation’s wealth and that, although their incomes had risen over the past twenty-five years, the incomes of the lower classes were stagnant or had even fallen. He ominously concluded:

Part of young people’s affection for socialism is grounded in a distrust of capitalism that grew out of the Great Recession.

Many millennials blamed the economic crisis on unregulated free markets, and polls show that between 2010 and 2018 their support for capitalism dropped from 68 percent to 45 percent. This skepticism made them the least likely generation in history to invest their savings for retirement. Some of them even believe retirement saving is pointless because, as one thirty-two-year-old political consultant put it, “I don’t think the world can sustain capitalism for another decade. It’s socialism or bust.”
.
If you want to find out more, pre-order your copy ofCan a Catholic Be a Socialist? today!