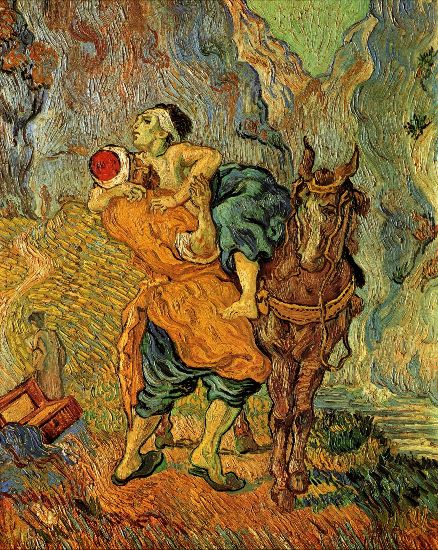 The famous parable of the Good Samaritan is found only in the Gospel according to St. Luke. It speaks especially of works of mercy, a theme dear to the heart of Luke and his companion St. Paul, who was especially mindful of the poor (see Galatians 2:10).

A certain man went down from Jerusalem to Jericho and fell among robbers who also stripped him, and having wounded him went away, leaving him half-dead. And it happened that a certain priest went down the same way: and seeing him, passed by. In like manner also, a Levite, when he was near the place and saw him, passed by. But a certain Samaritan being on his journey came near him, and seeing him was moved with compassion. And going up to him, bound up his wounds, pouring in oil and wine, and setting him upon his own beast, brought him to an inn and took care of him.
And the next day, he took out two coins and gave them to the innkeeper and said, “Whatsoever you shall spend over and above I, at my return, will repay you.” Which of these three in your opinion was neighbor to him that fell among the robbers? But he said, “He that showed mercy to him.” And Jesus said to him: “Go and do likewise” (Luke 10:30-37).

The Context of the Parable

Jesus told this parable in response to a question by a teacher of the law who was testing Jesus about the conditions for possessing eternal life. The lawyer correctly identifies the great commandments of love of God and love of neighbor, but then, in an attempt to justify himself, he asks for a clarification about who is his neighbor. It is remarkable that Jesus answers his question so beautifully and profoundly even though his motivations are not upright. Jesus is the sower who sows the good seed even on bad soil. The lawyer wants to appear knowledgeable and deserving of the title “teacher.” But Jesus emphasizes the fact that it is not knowledge of the commandments but doing the commandments that results in eternal life.

Mercy is not just about words, it is even more about deeds.

The Literal Sense of the Parable

The literal sense of this parable instructs us that our neighbors are not restricted to those who hold the same beliefs as we do. Certainly the priest and the Levite were authorities and knowledgeable about the law of God, yet that knowledge did not make them a neighbor to the fallen man.

On the other hand, the Samaritan, who held not only different beliefs, but false beliefs, was moved with compassion, and through this compassion was moved to action. This underscores the spiritual universality of the new priesthood (whether the ministerial priesthood or the priesthood of all the baptized), which is truly universal, truly catholic, not bound to one people nor giving preference to carnal relations. Deeds of love and mercy are not restricted to those who are always correct, and it is compassion and the deeds that flow from it that determine who our neighbor is. Our neighbor is anyone who does deeds of mercy or anyone to whom we can show mercy.

The Spiritual Sense of the Parable

It is worthwhile to pause and reflect more profoundly on the spiritual sense of this parable, since it is a summary of the entire history of salvation.

A certain man went down from Jerusalem to Jericho. In its spiritual sense, this certain man was Adam. For in ancient Hebrew and Aramaic (the language Jesus would have actually been speaking) the word for “man” is the name “Adam.” Adam was at first in Jerusalem, which means “the city of peace”—namely, the garden of paradise—but then he went down into Jericho—that is, into the state of corruption. St. Augustine observes that Jericho means “moon,” which, by its waxing and waning, indicates the mutability of man’s present state. And he fell among robbers. These robbers signify the devil and his angels, who stripped him of the garment of charity and original justice. For charity is often represented in Scripture under the figure of a garment, as when St. Paul says, “Over all these, put on charity” (Col. 3:14). And they left him wounded with the wound of original sin and the wounds of actual sins.

After this, they departed leaving him half-dead. The demons abandoned man since they had no interest in him save to lure him into sin, though they feigned interest in his welfare at first. This is how the demons tempt us: by pretending to have our best interests at heart, but then after we sin they show their true colors. After the fall, man is said to be half-dead, either because, “man after sin is said to be half-dead because his soul is immortal, but his body mortal, so that the half of man is under death;” or because having lost the life of God in their souls, men still retained the life of their bodies for a time, so while their bodies were alive, their souls were dead.

If you want to find out more, order your copy of Secrets From Heaven today!