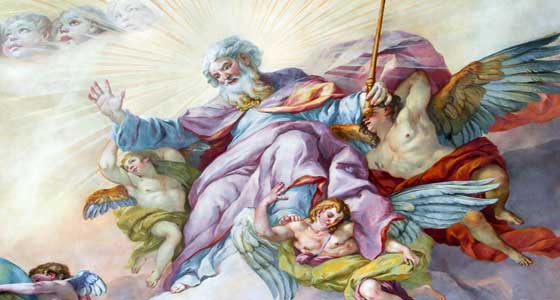 In the thirteenth century, Thomas Aquinas added to Christian theology by applying principles of Greek philosophy to the explanation and defense of the Christian faith.

One of his most famous works is the Summa Theologiae, which was intended to be an introductory theology text. Because of this, Aquinas’s famous Five Ways of proving the existence of God only comprise a few pages of text.

As such, they must be compared with Aquinas’s thought as a whole to be fully effective.

In this sample lesson from Trent Horn’s School of Apologetics course,Evidence for God, we’ll engage in a general overview of these arguments and then, in the lessons that follow, we will provide an in-depth examination of Aquinas’s first way, which he considered to be the most “manifest” way of proving God exists. Scholars offer different interpretations of Aquinas’s Five Ways, but here we will look at one way of explaining them.

- This is an argument from causation that reasons back to God as the ultimate cause of the universe.

- Aquinas did not believe that one could prove from reason alone that the world had a beginning in time and that God caused it to come into existence from nothing. But Aquinas did believe that only God could explain the series of causes and effect that would exist in an eternal universe.

- For example, a series of dominoes falling one at a time would be a temporal causal series. The dominoes would keep falling even if you threw away the ones that already fell. A series of gears spinning, however, would be a hierarchical series. All the gears would stop if you removed any single gear. And like a giant gear in the center of an assembly of smaller gears, Aquinas concludes that there must be a reality that causes and sustains all things without receiving causation or existence from anything else. This “uncaused cause” is what many people call God.

- The third way involves the notions of possibility and necessity.

- Aquinas says things in the world are possible in the sense that there are circumstances where they could not exist. But if everything is possible then it’s possible that at one time nothing existed. If that were the case, then there would be nothing today. Since there is something today, something must exist that is necessary. This necessary existence must be innate or gained from another. Since you can’t have an infinite chain of efficient causes, something must be necessary innately.

- The fourth way relies on the concept of degrees of perfection.

- Aquinas begins by noting that certain things are “more” or “less” good in respect to a maximum example of that goodness. He then writes, “The maximum in any genus is the cause of all in that genus . . . Therefore, there must also be something which is to all beings the cause of their being, goodness, and every other perfection; and this we call God.”

- According to Peter Kreeft and Ronald Tacelli, “If these degrees of perfection pertain to being and being is caused in finite creatures, then there must exist a ‘best,’ a source and real standard of all perfections that we belong to us as beings. This perfect being—the ‘Being of all beings,’ ‘the Perfection of all perfections’—is God.” (Handbook of Christian Apologetics, 55)

- Aquinas’s fifth way is an argument from design.

- It is not merely an argument from the complexity in the universe. Instead, it seeks to show that there must be an intelligence that orders the universe and creates the regularity we see in things like natural laws.

- He writes, “Things which lack intelligence, such as natural bodies, act for an end, and this is evident from their acting always, or nearly always, in the same way, so as to obtain the best result.”

- Aquinas then says that just as an arrow cannot hit a target without an archer, unintelligent forces cannot achieve their regular ends without an intelligent cause, which is God.