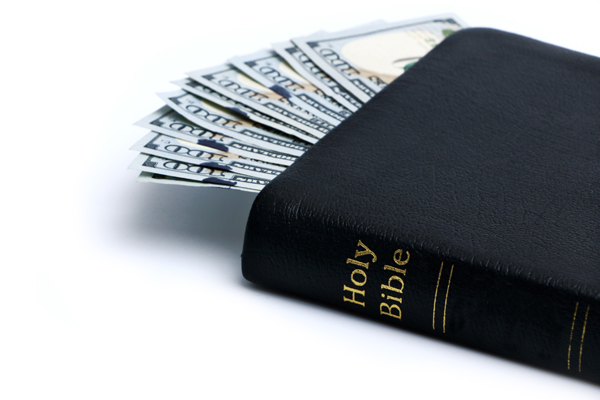 I was sitting on the couch with my arms crossed while the credits rolled, when one of my friends asked me, “What did you think of the movie?”

“Aside from the subpar acting?” I replied. “I think it had a terrible message.”

“What do you mean? It’s a movie about people becoming Christian. What’s so terrible about that?”

“Nothing,” I said. “But the movie’s message was that if you accept Jesus as your savior, your car will start running again, your wife won’t be infertile anymore, and the football team you coach will win the big game. But the Christian life doesn’t always work out that way. This movie preached a false prosperity gospel.”

Prosperity theology, also called the prosperity gospel or the health-and-wealth gospel, can be traced back to the New Thought movement of late nineteenth-century America. Adherents of this movement, many of whom were not Christian, claimed that the mind had power over reality—power that could be used to cure disease or end poverty.

Prosperity preachers took this mindset and applied it to Jesus’ promises that whatever we give will be “given back to us” (Luke 6:38) and that if we ask anything in his name he will give it to us (John 14:14). So, if we just ask Jesus for health and wealth he will give it to us! According to a 2006 Time magazine survey, one-third of Christians believe, “If you give your money to God, God will bless you with more money.” They believe in a Jesus who wants us to have unending happiness not just in the life to come but in the life we have right now—and the only thing keeping us from this happiness is the refusal to ask for it.

Prosperity theology became popular in the mid-twentieth century among Pentecostals who believed that a person could know that God favored him through the reception of spiritual gifts (or charisms). These gifts were usually things like prophecy or speaking in tongues, but the gifts of prosperity and comfort became a siren song among televangelists like Kenneth Copeland and Oral Roberts. They promised that God will bless people who plant “seed-faith”—give financial gifts—with even more money than they had given. This would happen because of what televangelist Robert Tilton called the “law of compensation.” According to Roberts, “Luke 6:38 says, ‘Give, and it will be given to you.’ We must first plant a seed of faith so that God can multiply it back to meet our need.”

Copeland wrote in Laws of Prosperity, “Do you want a hundredfold return on your money? Give and let God multiply it back to you. No bank in the world offers this kind of return! Praise the Lord!” Lest you think Copeland is being metaphorical, his wife Gloria describes the precise return believers can expect from their “investment”:

In Mark, Jesus promises, “There is no one who has left house or brothers or sisters or mother or father or children or lands, for my sake and for the gospel, who will not receive a hundredfold now in this time, houses and brothers and sisters and mothers and children and lands” (10:29-30). Now, if we aren’t literally going to have hundreds of new family members in this life as a reward for leaving some, why should we believe that we’ll literally have hundreds of new possessions? This verse is not about Jesus’ guaranteed rate of return on your tithe but about God’s care for those who have sacrificed their lives to serve him.

Other prosperity teachers cite Jesus’ promise that “your Father who is in heaven give[s] good things to those who ask him” (Matt. 7:11). Leroy Thompson uses the analogy of a multimillionaire who has so much money that he doesn’t bat an eye at buying his adult children a home with cash. He then asks, “How much more is God willing to do for his children? Do you believe God is at least a multi-millionaire?”

But here, too, Jesus is talking primarily about God giving us spiritual gifts, not material blessings. This is evident in the parallel passage in Luke 11:13, where Jesus says, “If you then, who are evil, know how to give good gifts to your children, how much more will the heavenly Father give the Holy Spirit to those who ask him!”

Thompson’s own analogy also undermines his argument. Some wealthy people might buy their children whatever they want, but others raise their children to be self-reliant, to help them develop good character. If God is at least as wise as these wealthy men, then maybe he will not automatically give us wealth because he wants something for us that money cannot provide.

Finally, some cite John 14:14, where Jesus promises, “If you ask anything in my name, I will do it.” One prosperity preacher says, “When we pray, believing that we have already received what we are praying, God has no choice but to make our prayers come to pass.”

But prayer is not magic; God is not a genie in a lamp. He will grant only what we ask in accordance with his will. That this is the meaning of John 14:14 is made clear by the evangelist in his first epistle, where he says, “And this is the confidence which we have in him, that if we ask anything according to his will he hears us” (1 John 5:14).