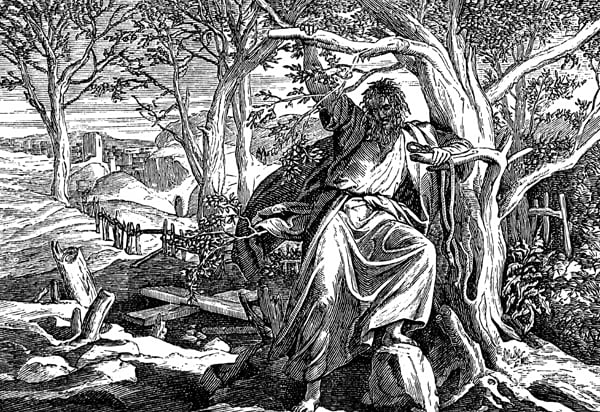 CHALLENGE: Matthew and Luke contradict each other. Matthew says Judas hung himself (Matt. 27:5), but Luke says that “falling headlong he burst open in the middle and all his bowels gushed out” (Acts 1:18).

DEFENSE: The accounts preserve different aspects of the event but do not contradict each other.

Judas probably began accompanying Jesus while in his twenties (Jesus himself began his ministry when about thirty; Luke 3:23). This suggests Judas died a sudden and remarkable death (i.e., not an ordinary death due to old age). Matthew’s report of his suicidal hanging accounts for this, leaving us to explain Luke’s reference to him falling and bursting open.

The earliest explanation is found in the second-century historian Papias, who wrote around A.D. 120. His works are lost but partially preserved in other writers. According to the fourth-century writer Apollinarius of Laodicea, Judas survived the hanging by being cut down before he choked to death, but he quotes Papias as saying Judas suffered severe swelling (edema) of the head and body, eventually causing him to burst open (see Monte Shanks, Papias and the New Testament, chapter 4, fragment 6). We now know that edema of the neck and body can be a consequence of strangulation, so Papias’s account may be based in fact.

Others have proposed that Judas remained hanging on a tree branch until his body began to decompose and swell due to the gases decomposition produces. The rope then broke or slipped, causing his body to burst from the force of impact.

Some have noted that the traditional site of Judas’s death features trees along a high ridge where strong winds occur. The winds may have caused the rope to slip, and the height of the ridge may have added to the force of impact, causing the body to burst.

If you enjoyed this excerpt, and want to find out more, order your copy of A Daily Defense