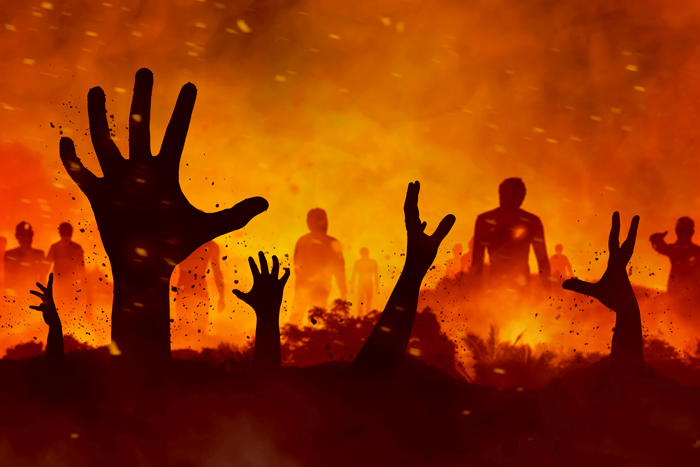 It's time for you to subscribe and find out what all the fuss is about.

But first, here's a Sneak Peek at an upcoming article by Karlo Broussard where he considers whether the doctrine of hell is compatible with God being all-good and all-loving...

There is an online meme with a young adult couple that reads: “If you don’t love me, I’ll make sure you burn forever. If it’s creepy when he says it, why is it beautiful when God says it?”

Obviously, the meme is meant to express the alleged incompatibility between the Christian doctrine of hell and its belief that God is all-good. How can God be all-good and all-loving, so the argument goes, and at the same time will that someone experience eternal torment?

There are two possible reasons why someone might think that God and hell are incompatible. One is that punishment itself is a bad thing. And if that were the case, then surely an all-good God wouldn’t punish someone.

The other possible hang-up is the eternal nature of hell.

They may say, “Okay, I can accept punishment as consistent with God’s goodness, but I can’t accept eternal punishment. That seems unjust and therefore contrary to God’s goodness.”

There are two objections here, so let’s deal with each in turn.

Our first line of response is that the punishment of hell is primarily the privation of the ultimate joy that every human being longs for, which is a natural consequence that flows from a person’s rejection of God as their ultimate end, the source of all joy (see CCC 1057).

As St. Augustine taught, our hearts are made for God and they are restless until they rest in him (The Confessions, book 1).

If a person chooses to separate himself from God for eternity, the state of restlessness or misery is simply a natural consequence. The torment follows from the way God has made human nature.

Suppose a father tells his son, “If you want to go to the movies, then you have to clean your room,” and the son chooses not to clean his room. The result of his choice is that he doesn’t get to go to the movies. He throws a fit. His “pain,” the deprivation of not seeing a movie, is a consequence of his choice. But notice that the connection between the consequence and the choice is not natural. The father imposes it.

Contrast this with the scenario of an individual who intentionally puts a plastic bag over his head and is asphyxiated. The painful effect of death is a natural consequence of stopping his supply of oxygen. It belongs to his nature that he needs oxygen to live. If he doesn’t have oxygen, then he doesn’t have life.

Similarly, it belongs to human nature for a person to be united to God in order to have complete and perfect happiness. If he’s not united to God, then no happiness and only misery.

Why would it be contrary to God’s goodness to allow human nature to function according to the design he created? If God decides to create something with a particular nature, then it belongs to his goodness to treat that thing according to its nature.

God made humans to be in union with him for an eternity. Therefore, if anyone chooses to reject such union and end up separated from God for an eternity, which is the essence of hell (CCC 1033), his misery would be the natural result given his nature. And there is nothing contrary to God’s goodness to allow nature to take its course—whether it takes it in beatitude with God in heaven or misery without him in hell.

Did you like this excerpt? To find out more on the Doctrine of Hell and compatibility with God's Mercy, subscribe today to Catholic Answers Magazine!