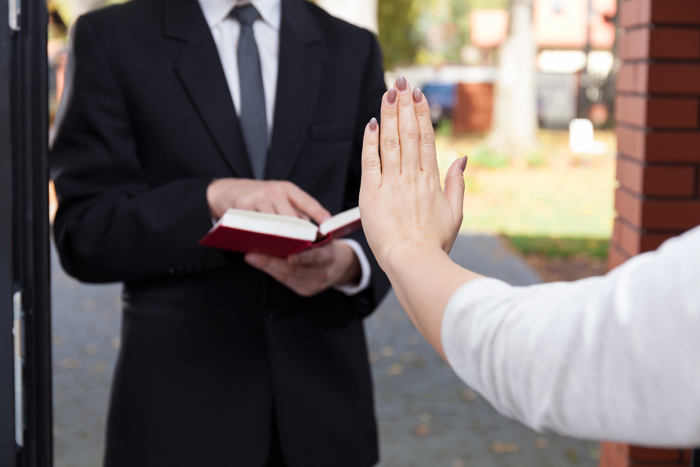 It’s Saturday afternoon, and you’re at home spending time getting caught up on some of your chores when the doorbell rings. You open the front door and see two neatly-dressed people standing on your doorstep, their briefcases brimming with the latest issues of The Watchtower and Awake! They tell you that they are in the neighborhood, talking with people who are concerned about what is happening in the world today—crime, drugs, immorality, violence—and they want a few minutes of your time to share a message with you.

After getting you to agree that humanity is not exactly a paradigm of virtue these days, they appeal to your desire for “a better world” by describing an earth without war, without sickness, without hatred, and without want or need. Then they pique your curiosity by asking you if you would like to know more about such an existence, adding that God’s plan for humanity is precisely such a paradise. Since their message in some way seems relevant and since through common courtesy you give them the benefit of the doubt, you agree to listen to what they have to say.

This situation has been played out countless times across most neighborhoods, and it is the proverbial foot-in-the-door approach that can result in unsuspecting Catholics abandoning their religious upbringing to become Jehovah’s Witnesses, members of the Watchtower organization. When such a change happens, very often family members and loved ones are left reeling—at a loss to know how to counter the Watchtower’s beliefs or how to rescue their loved ones from the spiritual blindness that has enveloped them.

This type of occurrence is real, and its relevance hits home for many Catholics who have brothers, sisters, cousins, grandparents, spouses, or friends “serving Jehovah God.” They distribute the Watchtower’s publications and warn people of the imminence of Armageddon—the final conflict between God and Satan—the Watchtower’s central theme.

In fact, a significant percentage of Jehovah’s Witnesses are former Catholics, so this issue cannot be lightly brushed aside by those who profess the One, Holy, Catholic, and Apostolic Faith. The salvation of souls is at stake, and we must do what we can to help those who have been ensnared by the Watchtower.

The reasons people become involved in groups like the Jehovah’s Witnesses vary, but they often boil down to three:

• People have been poorly taught the Catholic faith and therefore cannot adequately respond to the Watchtower’s theological assault on it. Since the Witnesses are well trained in presenting their beliefs and “proving” them with well-worn Bible verses (which, by the way, are taken out of context), they provide what may at first appear to be compelling reasons to join them. People who are unfamiliar with these doctrinal issues are often easily swayed.

• People experience a void in their lives, such as a desire for love and attention or a quest for purpose and meaning, and they are looking for something to fill that void. Consequently, they turn to groups that offer both companionship and ready-made answers to all of life’s most difficult questions.

• People are at transitional periods in their lives (starting college, beginning a new job, undergoing a relocation), and the accompanying disorientation leaves them more susceptible to the influence of groups such as the Witnesses. Once individuals become Jehovah’s Witnesses, they are taught to view the Catholic faith as a satanic corruption of the true faith from which they should remove themselves as far as possible.

What, then, is a Catholic to do about a family member or friend who has become a Witness?

Fortunately, there is hope. There are ways to deal with this type of situation, and there are responses to the belief system of the Watchtower organization. We need not plead ignorance or incompetence regarding the subject matter, for with a little education and lots of prayer we can become the very instruments by which the Holy Spirit will lead a person out of the Watchtower’s darkness.

One of the best approaches is to know the competition, and in this regard Answering Jehovah’s Witnesses will prove to be a useful tool in combating the Jehovah’s Witnesses’ mind-set and doctrines. Since this work is intended for the “average Catholic,” who has no formal training in theology, it is designed to be easily understood and practical.

Beginning with the foundations of the Watchtower organization, Answering Jehovah’s Witnesses deals with its presidents and history, moves next through the basic structure and content of the Jehovah’s Witnesses’ world, and then discusses the various doctrines of the Watchtower and how to refute them. Particular attention is given to some of the favorite verses and standard topics that a Witness will typically use in rejecting the Catholic faith. Finally, some extremely helpful and practical suggestions are offered for how to interact with someone who has become a Jehovah’s Witness.

There are some good resources generally available for use in refuting the Watchtower’s theology. But very few of them proceed from a specifically Catholic perspective, so invariably such resources are helpful only to a point. Catholics need not be at a disadvantage, however. Since this book is written by a staff apologist at Catholic Answers, the reader can rest assured that its contents are faithful to the Church’s teachings.

It is time that Catholics begin to reclaim the spiritual ground lost to the Watchtower organization, and with the help of this book, I am confident that this goal is well within our reach.