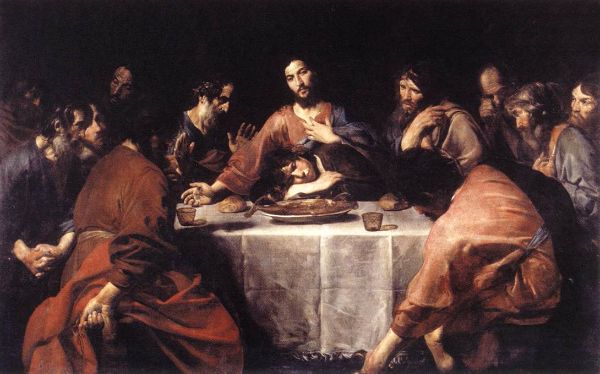 Perhaps the clearest teaching on the papacy is at the Last Supper. That may surprise some readers. After all, there’s an all too common misconception that the Catholic claim for the papacy boils down entirely to Jesus’ words to Peter in Matthew 16:18 (“upon this rock, I will build my church”) and the identification of the rock with Peter himself. To be sure, we’ll cover that ground later, but it’s more important to start with the Last Supper. It’s there, after all, that we find the Twelve arguing (once again) over which of them is the greatest. Here Jesus spends a great deal of time imparting final words of wisdom to the Twelve before his passion and death. In other words, given the context, this is precisely where we would expect to find Jesus talking about structures of authority within the Church.

Some Protestants find the fact that Jesus is still having to answer these questions as a sort of argument from silence against the papacy. One author objected, “Why did the disciples even ask the question if Jesus had already established Peter as the authority? Obviously, they did not understand Jesus’ statement about the rock, as recorded in Matthew 16, as referring to Peter as the head of the church.” This much is surely true. At this point, the Twelve still don’t have a full and clear understanding of the papacy. But this is hardly an argument against the papacy. After Jesus prophesied his death and resurrection, we find the Twelve quietly “questioning what the rising from the dead meant” (Mark 9:10), so the confusion of the Twelve is no indication that Jesus had been silent on this point. And this isn’t even the first time that Jesus has had to answer the question about which of them is the greatest (cf. Luke 9:46-48). So the mere fact that the Twelve are asking which of them is the greatest is hardly evidence that Jesus hasn’t already answered the question.

Before we get to Jesus’ words directly to St. Peter, it’s important to understand the setting. The Twelve are debating over greatness once again, and Jesus responds in a new way. In the past, Jesus called their attention to the heights of holiness by placing a child in their midst and saying, “Whoever humbles himself like this child, he is the greatest in the kingdom of heaven” (Matt. 18:4). But here at the Last Supper, he will speak of a different sort of greatness: authority. “The kings of the Gentiles exercise lordship over them; and those in authority over them are called benefactors. But not so with you; rather let the greatest among you become as the youngest, and the leader as one who serves” (Luke 22:25-26).

In contrasting the authority of the Twelve with that of the “kings of the Gentiles,” Jesus’ comparison presupposes that the Twelve have some kind of royal authority, but of a different kind from what they were accustomed to among the Gentiles. Indeed, the word he uses that’s translated here as “leader” is hēgeomai (ἡγέομαι), the same word used to describe the “ruler who will govern my people Israel” (Matt. 2:6) and the same word St. Stephen uses to describe Joseph as “governor over Egypt” (Acts 7:10). A few verses later, the implicit kingship being promised the Twelve is made explicit: “as my Father appointed a kingdom for me, so do I appoint for you that you may eat and drink at my table in my kingdom, and sit on thrones judging the twelve tribes of Israel” (Luke 22:29-30). Craig A. Evans is probably correct that “judging” here is not punitive (like condemning), but “administrative and judicial.”

It is remarkable that this promise has received so little commentary, and has gone so little-noticed among Christians, because it ought to revolutionize the way in which we revere the apostles.