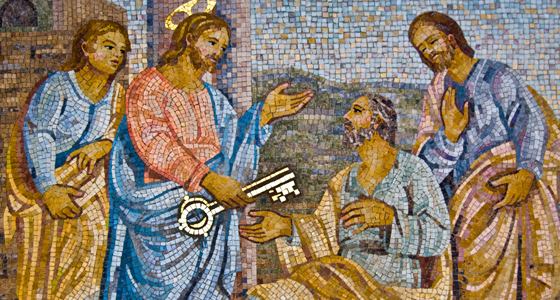 The first encounter between Jesus and Peter is presented to us in two different ways. Mark, Matthew, and Luke present Peter working as a fisherman in Galilee when Jesus calls him to become one of his followers. John, on the other hand, tells us that Jesus had gone out, like many people, to see John the Baptist in Judea, and that same time a group of men from Bethsaida, among Peter and his brother Andrew, also went to see John the Baptist. In this account, the Baptist testifies that Jesus is the “Lamb of God” (John 1:36) in front of Andrew, who begins to follow Jesus, and who later introduces Peter to Jesus.

It is fair to surmise from the variations in the stories of how Peter and Jesus met that their meeting, like many meetings between people who later become friends, included starts and stops. People have overlapping circles of acquaintances, maybe they run into each other a few times, and, finally, they get to know one another. Something like this seems to have happened for Peter and Jesus. Clearly, none of the Gospel accounts of Peter’s meeting with Jesus is a full account. Each Gospel writer gives a few details, the ones he thinks are important.

Perhaps it happened that Peter heard about Jesus from Andrew and from other people as well. At some point, at the time when Jesus was among those who went out to see John the Baptist, Peter was introduced to Jesus and Jesus impressed him. Jesus seems to have taken a particular interest in Peter as well, giving him a nickname early on. But Jesus did not immediately call Peter to follow him.

Mark’s Gospel (followed, somewhat, by Matthew and Luke) relate an event that likely happened a little later, when Peter had returned to his work and home in Bethsaida near the Sea of Galilee. As Jesus began his preaching and healing ministry in the towns around the Sea of Galilee, he called Peter to follow him, and Peter—captivated by Jesus (and probably thinking by now that Jesus was, indeed, the Messiah)—followed.


One thing to note about the whole encounter between Jesus and Peter is that it is not presented to us as an encounter between an obvious sinner and his savior. Peter is not mired in sinful pursuits only to be rescued by Jesus.
I point this out because modern emotional accounts of Christianity often include the hopeless sinner who meets Jesus in a dramatic and salvific moment. Such stories do happen. But sometimes they are exaggerated for rhetorical effect, which can lead people who have ordinary encounters with Jesus, encounters similar to Peter’s, to question whether they have really met Jesus at all.

Often, even in the modern world, one bumps into Jesus here and there before any friendship develops. There is not always a dramatic first moment. In Peter’s case, lots of drama will come later as he follows Jesus, but their first meetings are piecemeal and modest. And even before he met Jesus, every indication we are given in the Gospels suggests that Peter was a solid Jewish man, living his faith as a responsible adult. He was not a decrepit sinner in desperate need.

So, if Peter is not yanked by Jesus out of the traps of sin, what, exactly, makes this encounter so special that Peter is willing to give up his usual life and become a follower? Answering this question is important because most Christians, despite the dramatic stories that some can tell, do not come to know Jesus in desperate circumstances.

Indeed, some people reject Jesus because they think they don’t need him, because their lives are not at rock bottom. They think they are doing fine without him. Such people do not know what they are missing, and so they can easily let any encounter they might have pass by without responding to it.

Perhaps it looked like Peter was doing fine without him, too, in the usual ways of reckoning. But somehow Peter knew that he was not beyond needing Jesus, because he seems to have recognized in him the divine power that bring a human being fully to life. And doing fine and being fully alive are two very different things.

The power that Peter encounters in Jesus is something far beyond what human religious teachers and systems can provide. Even the daunting military power of the Roman occupiers is nothing compared to the raw and immediate power of Jesus.

Did you enjoy this excerpt? Order your copy of A Teacher of Strange Things Today!