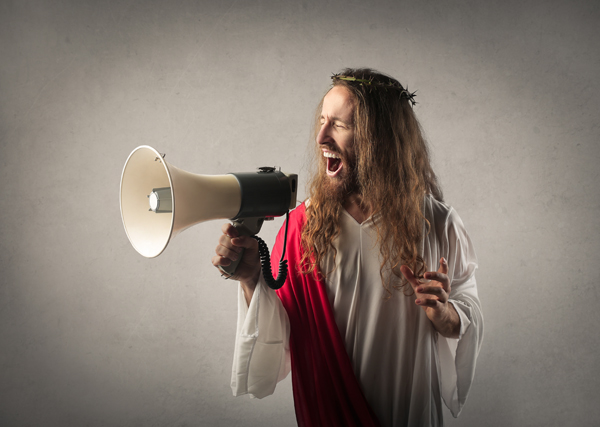 Please enjoy this excerpt from Counterfeit Christs: Finding The Real Jesus Among The Impostors

It was a crisp morning at the University of New Mexico, where I was engaging in pro-life evangelism. At the time, the campus medical school was teaching students how to perform abortions, so the images of aborted children we displayed garnered a fairly hostile response from the campus population. One student’s response still sticks out in my mind.

“And who are you supposed to be?” I asked.

“You know me. I am your master and I demand you stop imposing your values on other people. It offends me!”

“Oh!” I said with enthusiasm. “You must be Jesus. I’m a huge fan but I have a question. You love everyone, right?”

“You shall love your neighbor as yourself!” he shouted back as loud as he could.

“Right, so are babies in the womb my neighbor? If I’m supposed to love unborn children, shouldn’t I try to get people to stop killing them?”

It’s funny that this man didn’t condemn Jesus along with Christians who stand up for the unborn. Instead, he believed that if Jesus were really present he would have agreed with him that we were the problem, not abortionists.

It seems like everyone wants to have Jesus on “their side.”
Sometimes, people are willing even to ignore or re-write history in order to make that happen.

For example, in 1813 Thomas Jefferson composed The Life and Morals of Jesus of Nazareth (later known as the Jefferson Bible) by using a razor to cut out sections of the New Testament that, in his view, described the real Jesus.

Jefferson was a deist who rejected the idea of God intervening in the world, so the miraculous parts of the New Testament ended up on a literal cutting-room floor. What remained was the story of a wise moral teacher who was tragically killed and then buried in a tomb.

Jefferson would not be the only explorer in what would later be called “the quest for the historical Jesus.” These “questers” came to include both scholars and popular sensationalists claiming to have discovered the identity of the “historical Jesus” who became obscured by the traditional “Christ of faith” worshiped by Christians.

But is the Christ of faith a mere fantasy that must yield to what historical research says about Jesus? Or is the Jesus whom Christians worship the same person as the Jewish carpenter who lived in Palestine 2,000 years ago?

This is an essential question, because the foundation of our eternal salvation is rooted in events related to the birth, life, death, and resurrection of Jesus of Nazareth.

As Pope Benedict XVI wrote, “For biblical faith the historicity—and thus the ‘facticity’—of the Incarnation is indispensable. Faith demands that we consider Jesus as approachable by historical research.”

St. Paul agreed that our faith must be rooted in fact. As he declared to the Christians in Corinth: “If Christ has not been raised, your faith is futile and you are still in your sins” (1 Cor. 15:17).

In this book I have set out to show how historical research and sound biblical exegesis refute the many incorrect views people have about Jesus Christ—the phony, fictional, counterfeit versions of Jesus that they have devised for their own ends.

Entire books have been written on some of these counterfeits, but my goal is to identify and expose these imposters in a brief and straightforward way that everyone can understand.